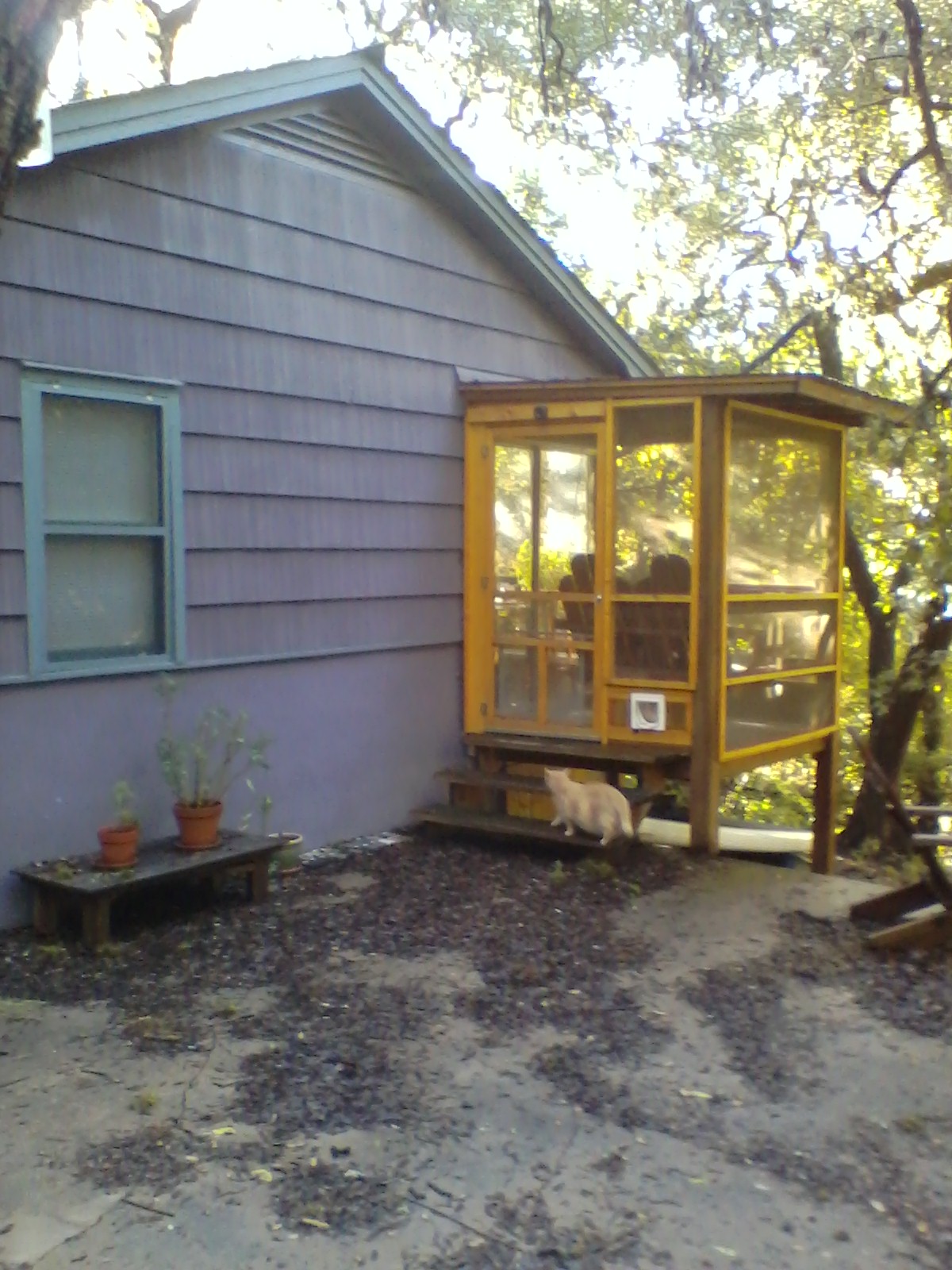 Cat on a Wet Tin Roof

One of my cats just did something unanticipated, which is no surprise since cats traffic in the unanticipated, but different than the usual preternatural cat athleticism and wild-hairicism, though not that it was all that exciting.  It was more like a suspenseful episode in a continuing series, like the episode in which heavy Tiger jumped three and a half feet straight down from our deck, legs extended outward, and flattened an unsuspecting possum nosing around underneath, causing them to face off closely, hissing and growling respectively.  But that's a previous episode.

In the light rain just now, right before dusk, and a few hours before heavier 100% chance thunderstorms move in, I spot Tsavo on the flat roof over my neighbor's cozy screened porch, which is attached to the much larger cottage, which itself has a sloped metal roof, which by now is already slippery.  Tsavo has already discerned all this and that he's stranded.

My strong silent type is plaintively mewing assertively.  He won't chance across the slippery roof to his usual access tree at the other end of the cottage.  He also doesn't trust me to catch him if he jumps while I stand on the top porch step.  My reach is about a foot short to earn his trust, though he's testing out the possibility with a front paw resting on the palm of my hand.  I love the soft feel of his padded paw.  His touch is light as a soul and endearing.  I admire his intelligent caution.  Such an interesting complicated being packed into such a lightweight form.

Tsavo retreats a foot or two from the edge.  Now, peering down at me, with his eyes alone he urges his not quite tall enough friend to "Get me down!"
.
Without access to a ladder, I have to find something he'll be comfortable stepping onto, something not unfamiliar, maybe irresistible.  An actual light goes on behind my eyes toward the middle of my head, and I go home and find a cardboard box about his size, bring it back, hold it up to him, and he doesn't hesitate, gets right in, and relieved revels in his deliverance, instantly curious about the box smells, who if anyone might have occupied it previously, notes a distant trace of catnip, and just plain wonders at the thrilling uniqueness of his own situation looking out on his woods from a bobbing box, the roof dilemma already a past episode.

Feeling him step quickly and fully into the box held over my head is sweet validation.  Not only is he safe, but we've again reaffirmed our bond.  We've forged it first thing in the morning scanning the creek from the deck for signs of deer and coyote, exploring woods and flood plain in all seasons and weather, walking on vertical logs, him quickly and skillfully and me gingerly and clumsily, playing hide and seek among tall sycamore trunks, rolling on leaf-strewn ground rubbing and butting heads like lions in a pride, our heads turning together toward unexpected sounds, sharing eye contact in the pauses between his acrobatic jumps among high branches, scaling steep slopes together, me grasping at worn stumps and straw to pull myself up through the loose dirt and Tsavo waiting below then dashing suddenly quickly upward past me doing a dusty actual breast stroke through the dirt, his chest rubbing against the ground and his gaze fixed ahead, and my trusting he'll always come home when ready and possible and he trusting in his safe home permanently reserved, and then precious shared bed time together when it suits him.

This evening, I hadn't let him down, except literally, and he had again honored me with his trust, and we wouldn't be stuck out in the thunderstorm with a metal roof in common, in all a further bonding experience neither one of us was very interested in pursuing.

Tsavo stayed in the box even after I set it on my neighbor's patio and was eventually carried home in it, as if it were a sedan chair, with his head sticking out looking upon his realm, which is appropriate for a cat I call King of the Forest.  He often gets the royal treatment, though none quite as literal as on this evening's stroll home.

Thank goodness he went for the box gambit.  I was about to call the fire department.  Thank goodness for cats and their obsession with boxes, and for timely little flashes of good luck.

As we approach the deck of my cottage, Tsavo suddenly jumps desperately out of the box, scrambling up and over its sides, and sticks the landing on solid earth, one more small unanticipated jump for Tsavo, and one giant leap for catkind.  He once again is grounded, in more ways than one though, as it's time for him to come in for the night. 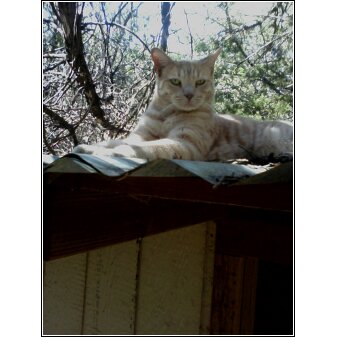 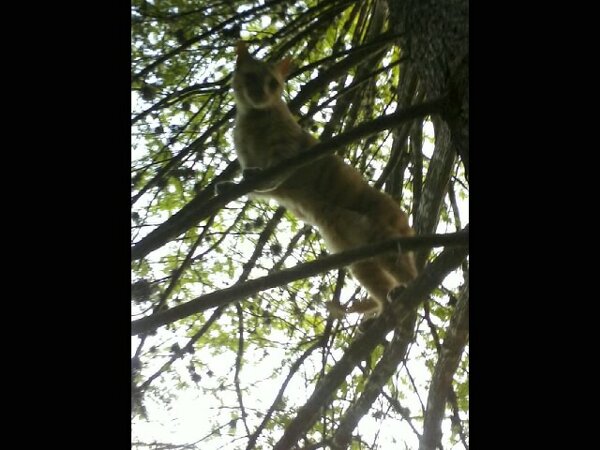 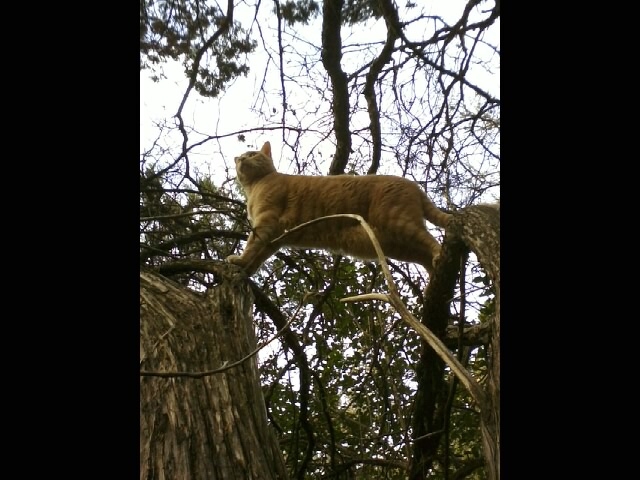 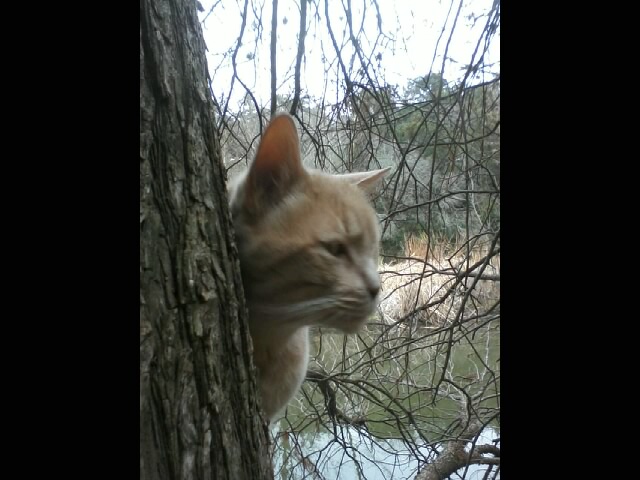 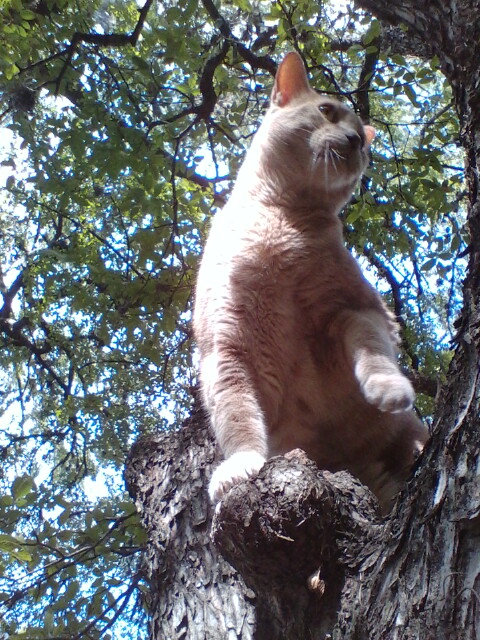 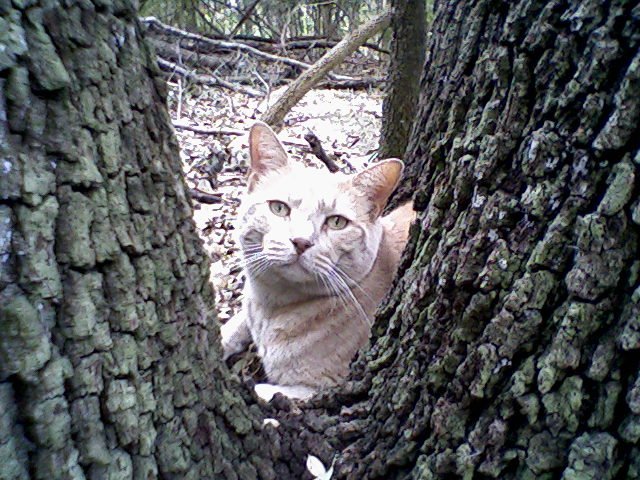 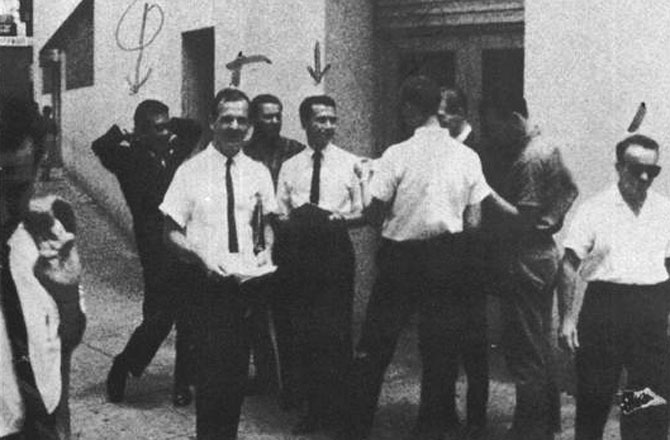 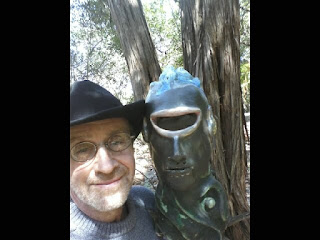