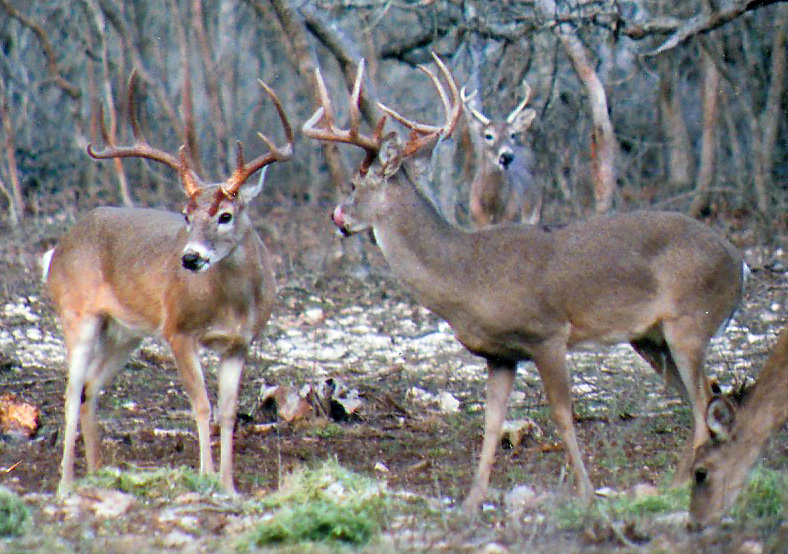 What We Did In Church Today
On his release from overnight indoor sheltering,  Tiger, as he often does, first lingers on the covered deck for a leisurely drink of water that's mellowed overnight in one of the two bowls kept filled for he and Tsavo.  This morning the bowls had the pleasing allure of some rain that had splashed in before midnight.
Tsavo almost always heads to a vantage point where he can survey the forest between cabin and shallow creek below, searching for whomever may be there, or may have recently passed through, because information among other things is deterrent and opportunity.  He's a cautious ranger of a cat, who knows his territory and his way around, and up and down many trees and their far-reaching branches, and he clearly discerns whose scents belong and whose aren't welcome.

This morning Tsavo's on the back edge of the deck, sweeping the dense panorama with all his senses. The late rain was a thorough one, and since scents carry further than sight even moreso in the dampness, and ground sounds are dampered, his senses are naturally heightened accordingly.

Tsavo doesn't have to stretch his senses far though, because 20 yards away two 6-point bucks and one 8-point are grazing and moseying along together this morning between cabin and creek.  This is very unusual, and Tsavo seems to do a doubletake upon sighting them, or it could be a heavy gulp.  I am watching him specifically and don't see deer till a minute later, and I have a surprised start myself and watch happily as they gradually descend to the floodplain, stopping here and there for a nibble, and disappear into further reaches of riparian church.

Ten or more minutes go by, the cats are wandering off into the woods and vicinities of neighboring cabins, and I'm indoors and begun writing down a quick account about the bucks, when I hear a short high-pitched sound very nearby that could be a branch scraping the corrugated metal roof or, I worried, a cat shrieking in brief distress.  My diminished hearing can play tricks on me.
I run onto the deck calling for the cats, and down and away running across the floodplain, a tawny tan coyote, its still wet fur a light orangish tint, splashes across the creek and up the steep bank vanishing among the trees, boulders, and brush.  I have a clear but brief distant view and don't think it's carrying a cat but can't be sure, and the whereabouts of mine are unknown.

I run down the slope through the obstacle maze of trees to creekside and hop onto a small sandbar, summon up a few loud fearsome guttural sounds, and throw several smooth well-rinsed rocks high against the steep opposite forested bank just for the effect of the noise.
Coyote is already long-gone, and the bucks whose scents it had likely been shadowing gone even longer.  A coyote is no match anyway for a big buck, let alone three, though cats are another and vulnerable story altogether, for all their feline prowess.  I linger among the vines and black willows along the creek a while longer, thrashing a bit, like a wannabe Gorilla - a lot of nature is all about the show - and head home wondering what I'll find.

Even though a cat the size of Tiger should have been easily spotted hanging from the jaws of a coyote, even from a distance, I am relieved to see him stretched upright on the deck.  His neck fur is raised a bit high, and mine still is too even as I enjoy my palpable relief to see him.
He may have known something had been awry, because he normally will follow me down to the creek if I've gone on ahead of him.  It's one of his favorite places in the world, as he loves a good long drink of natural water that he can provide for himself.  A new other favorite is under the property's tool and junk shed, where only small critters can fit and where a low cool breeze obviates the summer heat.

But I don't see Tsavo, and this does start to concern me, though he soon shows up in front of the cabin, sauntering in as if something momentous hadn't even happened.  He seems to wonder though what all the fuss has been about, as he'd undoubtedly heard Gorilla man crudely stalking the edge of the creek.  And his sixth sense - Perhaps the informed cumulative Meta-Gain from the sum of all his earthly ones? - must be at least as acutely keen as the others.

Tsavo's face acquires a hesitating quizzical look, as if eyebrows are raised, and his head may tilt the slightest bit, when he's contemplating something he hasn't quite yet comprehended.  Perhaps he thinks it all might have something to do with the bucks, which it has, though not in a way he or any of us might suspect it would have happened on this typical day; typical in that it can happen any day, on any typical day, and can happen again, though not in the same exact way.

This is what makes church so interesting. 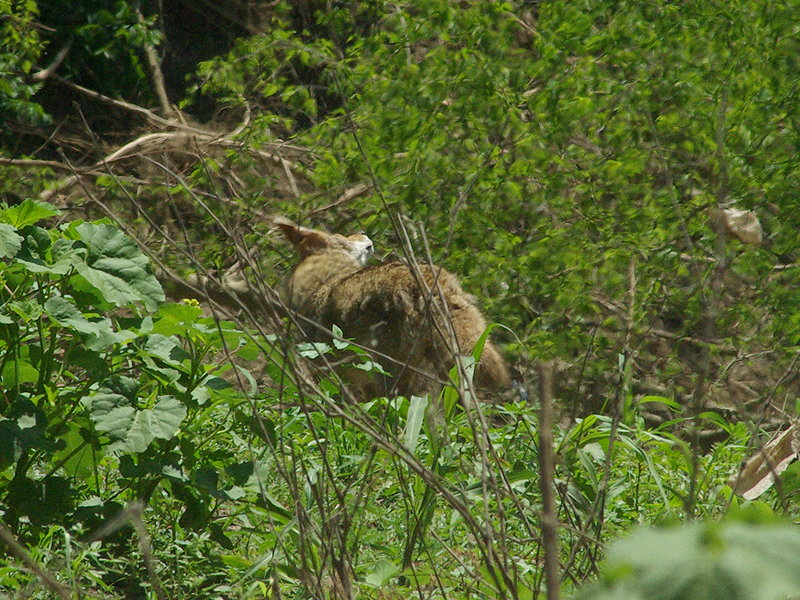 PostScript:  The cats were brought in for an hour of safekeeping.  Ersatz Gorilla went creekside again, quarter-inch frogs leaping desperately out of his way.  He was on a mission of protection.  He should be wearing a U.N. blue helmet on his big ersatz Gorilla head.  He was declaring a selective nature preserve, establishing a mental force field.
He was giving fair warning and caution to all miscreant coyotes, bobcats, and feral hogs living their lives as nature intends, and that goes for you too, you two hooting hoot owls - you know Who you are - and sounding interspecial support far and wide to bucks, does, and fawns everywhere, to raccoons, possum, skunks, nutria, field mice, wandering dogs, hepcats, escaped ferrets, and all others within the sound of his tantrum, as he banged his special defensive six-foot steel pole against trunks, logs, and rocks but only briefly, his tender non-Gorilla hands suffering the consequences, and chose another rock to throw willfully and nihilfully - willy nilly -against the other bank, the eternal other, but it turned out to be heart-shaped so kept it for his dear Missus.
So he went home and let the cats back out for a while longer, they having patiently endured their keep, till it's their time to come back in so as to allow the neighbor cats to go out and take their turn ruling the day, now that the coyote is gone.  But is it, or for how long?

Post-PostScript:  Just so you won't worry, Tsavo and Tiger are back in now.  Someone delivering pizza and a Sunday U.S. Postal Service carrier have safely delivered their Sunday packages next door.  The neighbor cats are on patrol and are quite stealthy and themselves veterans of our day to day church.  All is well or well enough. The ersatz Gorilla selective sanctuary and cat social club seems to be holding.  So, Amen. 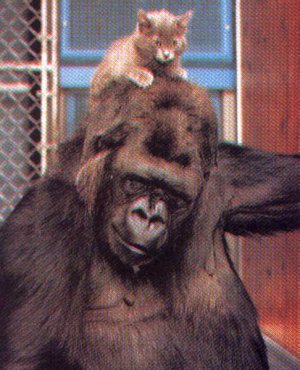 All photos are stock.  Directly above is Koko and her kitten.