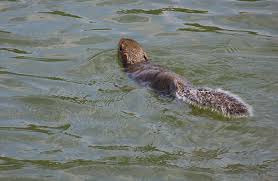 From One Thing To Another
|
Beside the shallow sandy clear near-still creek and its lanky bankside trees, pulling down hard on a thick vine up one 30-foot tallow, bending it slightly downward and away out over the water, I heard a splash and looked out to see a squirrel surprised to find itself quickly swimming across to the other bank, where it immediately climbed a small oak from which to safely gauge her new situation.  I looked up the now again straightened tallow to see an expertly woven cedar bark nest still lodged between thin treetop branches and realized it's one I'd noticed prior but had forgotten about, leaving one soaked high-diving squirrel too stunned to bark and an embarrassed primate who'd been enjoying his feat of strength a little too much.  I think a peace offering of shelled nuts might make us both feel a little better.

I'm remembering now the little friend who used to wait on my deck in the mornings for me to bring her a few blueberries, which she'd remove from my palm with her darting wizened little fingers.  Sitting there watching me through the row of tall windows, she had me tied around those little fingers.  I forgave her instantly for biting my thumb that first time.  After all, I'd shifted the blueberry a tiny bit between my thumb and forefinger just as she'd begun her lunge.  That was the only time she used her teeth, razor sharp by the way, and the reason I switched to my palm.  After seeing my thumb gush red and sensing my discomfort, she backed up a foot to see how I'd react.  She really wanted that blueberry, and I really wanted her to have it.  She switched to her expert little fingers that day and after that.  She knew what she was doing.  I was the one who had to learn how to share the space.

As so many good things can end sadly and suddenly, I saw a squirrel up on the street one day standing over the body of its friend.  It very reluctantly moved away as I carefully approached, and he stayed nearby to see what I would do.  Dreading to see what I soon saw, I recognized the easily identifiable uniquely scruffed tail of my morning pal.  She'd had a partner for several months.  I'd see them playing up and down and across the trees.  She even coaxed him into coming near the deck during our blueberry times.  Though he never quite became enamored enough of me, or of blueberries, to trust the situation entirely, he became confident his friend knew what she was doing.  The first time he witnessed our exchange he looked thoroughly alarmed and incredulous but warmed up to the outreach friendship fairly quickly.  I can still see her bringing his first blueberry over to him, still leery of taking his eyes off me, but he accepted it and they ran off together.

He stayed in the area for quite some time before I lost track of him.  He never approached me closely but would show up partway down a descent of the trunks of nearby trees regularly, with his tail twitching and eyes focused on me, to let me know he was ready for the blueberries and banana pieces I'd then leave for him on the deck.  I'd put them out, and he'd wait till I went inside.  I watched through the row of tall windows, and he'd snack on some on the deck and bring the rest with him.  She had brought us together.  We both loved her.  Now she was gone.  It was the best we could do.  We looked forward each day to it.  We could count on it.  Once he moved on, I had to also.

One bit of useful math that cardiologists employ during echocardiograms to help measure blood flow moving through the vital aortic valve is called the continuity equation.  This equation is useful in determining the degree of aortic stenosis and thereby is a calcuation affecting issues of life and death.  It uses a few different obtainable mathematical measurements to estimate conditions it can't specifically measure or describe.  And from Wikipedia:  "A continuity equation in physics is an equation that describes the transport of a conserved quantity."

A conserved quantity.  Our lives are conserved quantities.  We move from one thing to another in life, one place to another, our lifelong pilgrimage, estimating the importance of each thing, each place, conserving what we can of our experiences, and transporting them with us as long as we can, the vital flow of life, with sweet wishes for each precious moment and often for the mysterious unseen afterward, with unuttered hopes for a best that can't be specifically measured or described.

From one thing to another, from beginning to end, this is our experience.  This is all we know and why the belief in or hope or wish for life after death is so natural and understandable, almost inescapable, that death might be just one more thing meant to convey us onward to the next, that there can't be an end point because there hasn't been an end point, that our pilgrimage with our conserved quantity in a conserving universe, where energy can't be lost or gained - it's the law - is not the end at all, but only the limit beyond which conditions can't be measured, using any known math or physics, and that the equation of life must provide for its continuity, in some way, in whichever way that makes the most sense to you.

As in most things, we get to choose what we believe.  I choose to wait and see, with an open mind and content heart.  If I get to have an afterlife, great, but right now I think I'd be content to live that earlier moment forever, right after squirrel went for that first blueberry, saw the blood gushing from my thumb, backed away slightly to test the possibilities of the moment, and decided, along with I, to risk another try.  I was merely bleeding.  Squirrel risked her life.  There would be many intimate exchanges of trust and blueberries, something we looked forward to and could count on, preserved moments of a conserved quantity, of love, now transported to you.
at March 27, 2014