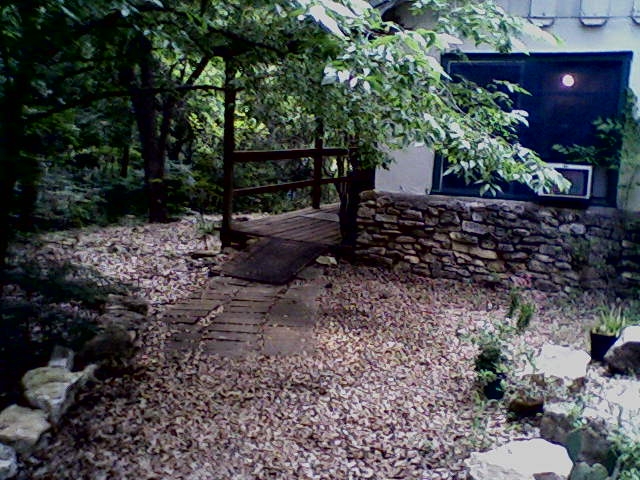 Untangling My Feet Is A Beginning

In the quiet of a night
in the woods inside a cottage
I wonder if the animals outside
can hear me and why I'm not
on the deck listening for them
searching for the bug light reflection
in their wild stares, tracking the birds
in their swift reckoning silence
and listening for a sniffling dillo's
low ramble and wondering
how quickly I might perish
if I had to live from the land
and how very soon I would
take to the garbage cans
or grub through loose dirt
for a gram of flesh or a spare acorn
to cook if a fire were a thing
I could concoct and if I should
and if they'd accept me as an equal
or if I'd need to first accept their terms
and hope to prove myself at some point
About midnight tonight, I was reminded of this poem after seeing two small brown rabbits, nocturnal neighbors, hopping through the woods down from the road. I've encountered them prior along the driveway and in the woods, always at deep dusk or later. They hop away but in no particular hurry, seeming to see me as a benign two-legged whichamacallit, and likely very slow compared to them. Tonight I saw them as I was walking back to the cottage from the mailbox.

Tsavo cat had a baby bunny by the scruff a year or so ago one evening, but it was a quick catch-and-release through my determined intervention and Tsavo's determined evasive cooperation. It could have been one of the two I saw tonight. A year ago, that bunny was scared, its heart beating like a metronome in a hurry. After Tsavo begrudgingly relinquished it, it was shaking but quiet and still for a while before moving on, adrenaline surging. Tsavo had to be restrained and contained and remained frustrated but not insane. He is a cool cat.

I encountered another nocturnal neighbor tonight as well, earlier, this one loudly snacking its way around the inside of a plastic garbage bag I forgot I'd left on the deck. I couldn't see what it was, and when I went to get a broom to sweep the bag into a box to carry to the garbage cans (it's called spontaneous contingency planning), whatever had been in the bag had taken the opportunity to vanish, a worthy adversary indeed, though vanishing is what I'd hoped it would do. Let's call it Moriarty.

Tiger cat, he of the pouncing on top of possum fame, had come to the door, wondering if his nemesis had returned perhaps for another standoff. Yet it was not to be, but how long can they stay apart? Fate seems to keep them crossing each other's path. Just two evenings ago, whichamacallit had to pick Tiger up just three cat steps from intercepting early-dusk possum on its path to our recycling bin. Tiger was whisked into the air, crying out in frustration, Nooo!. He wiggled, kicked his legs, and then sighed as he gave up his struggle, and possum, relieved, continued on its possum way.

When I was back home inside the cottage after taking the box up to the garbage cans, with the cats dozing or too near to dozing to want to stir, I heard another loud scruffling on the deck where the trash bag had been. This time the visitor was in plain sight. You can see who it was by the photos. Moriarty was a possum. It had returned to continue its midnight snack, which was now in the garbage can by the road. 'Waiter, I was still working on that'. Perhaps his dining can continue up by the road, a moveable feast fit this night for a fuzzy beast.

Luckily, benign whichamacallit had gotten to his camera phone in time to capture the Moriarty moment. The possum couldn't see through the window because of the porch light reflection. When the possum had earlier been inside the bag, it had jumped around like a jumping bean. Now it merely ambled and sniffed. Whichamacallit then put out a small handful of moist duck food pellets, of which it had eaten about a big handful two dusks prior after its close encounter with Tiger. Hopefully this easy living on the edge won't spoil a fella. 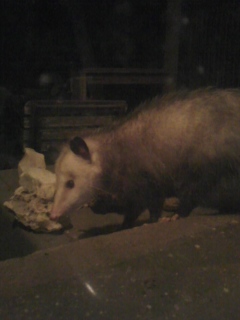 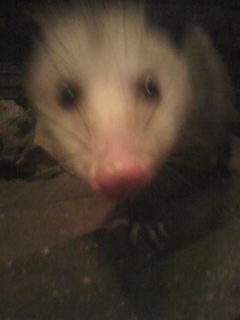 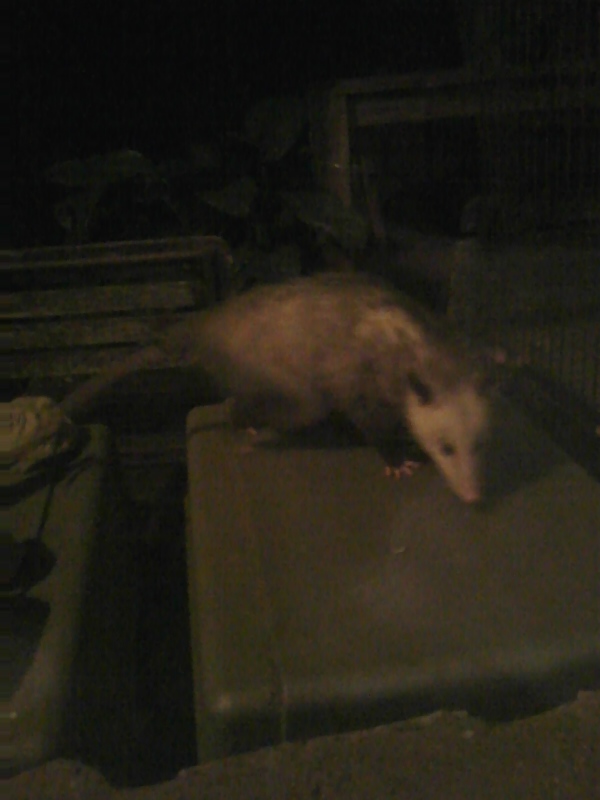