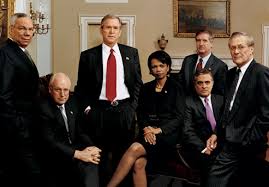 We Have Always Been At War With....(Fill in the blank)

I'm realizing most people don't understand what the Bush-Cheney-neocon power play in Iraq was basically about, and that makes sense because there's a gauzy veil of imposed ignorance and a practiced sleight-of-hand propaganda enveloping the area and the subsequent events. My limited understanding of it follows.

One short-term result of this was the U.S. having to shed some immediate sense of control over the regional players, but this is only a stage. At the same time U.S. influence is being shunned or downplayed by most of the regional leaders - because they and their populations see more clearly than ever that the U.S. is not a real ally but a destructive powerbroker - new regional power alliances are being nascently formed within the region and with the U.S., with both tacit and active U.S. assistance and approval.

And as some of these new and growing alliances will predominate someday, the U.S. influence with them will again grow and they will become first policy allies and eventually become the new regional power alliances with which the U.S. will wield as much or more control as prior to Bush-Cheney-neocon destruction of Iraq (Libya, Syria, Yemen, Somalia, et al). It will be a brand new ballgame but with some of the same teams and some new ones, but, crucially, with the same rules.

This was the intention, even before 9/11, because Bush-Cheney-neocons realized there was already underway a large regional movement away from U.S. hegemony. So Bush-Cheney-neocons acted to forestall this, like experienced forest firefighters would do in the face of a coming conflagration, by intentionally setting buffer and other directionalizing fires to direct the conflagration against itself, causing it to burn itself out quicker than it would have otherwise and to minimize the effect the coming regional conflagration would have on U.S. hegemony.

That the governing neocons committed horrendous mass-murder international war crimes in the process was of no concern to these self-righteous and self-interested narcissistic personality disorders.

This neocon strategy is now in its waiting phase, while the U.S. still feeds the buffer and other directionalizing fires with enough fuel and assistance to hopefully manage the conflagration. Managing a conflagration is not a guaranteed success though, but the empire is very patient when it comes to knowing and getting what it wants. Sitting atop possibly the hugest pile of money, influence, and power in recorded history, as well as with much successful ancient and modern historical precedent, the empire has a better view of the possibilities and acts accordingly in exceeding self-interest.

Julius Caesar used basically the same strategy against the many tribes and their leaders in Gaul and against the Germanic peoples of the time [http://en.wikipedia.org/wiki/Commentarii_de_Bello_Gallico]. It's a tried-and-true power play on a huge scale, part divide-and-conquer and part anarchy-management with favors and scheming.

The neocons actually began this current 'Grand Chessboard' strategy [http://www.amazon.com/The-Grand-Chessboard-Geostrategic-Imperatives/dp/0465027261, by national security advisor, Zbigniew Brzezinski] in the late 1970s under President Carter, when, along with the House of Saud, they began organizing extremist religionists in Pakistan from throughout South Central and Near East Asia to threaten the Soviet Union's influence over its own majority-Muslim border republics. This goaded the Soviet Union to invade Afghanistan to prevent its becoming an armed jihadist staging area on the Soviet Union's vulnerable southern border.

In other words, anti-Soviet neocons, with largely meta economic interests in mind even then, and with their Cold War mindset and moral bankruptcy, set this Middle Eastern fire a long time ago. Though exactly how the fire would spread was not specifically predictable, its general nature and direction would prove very useful and remains so to neocon goals, which are to further secure by hook or crook the economic realm for U.S. energy producers and their guiding energy and military-armament political controllers back in the U.S.

That's a primary reason why U.S. presidential elections and Congressional elections are so tightly scripted and controlled: There must not be room for independent thought or action, or the neocon, energy, and armaments interests might have to cede some power. This is an effective 'prevent defense', to borrow an American defensive football term, and it's a continual if not eternal desperate all-or-nothing best-defense-is-a-good-offense strategy.

So now that those U.S.- and its ally Saudi-created forces that goaded the Soviets into invading Afghanistan are now at work furthering chaos and U.S. and Saudi influence in the nearer Middle East region, seemingly at cross-purposes to neocon interests, ultimately they're actually working for neocon interests. These forces are the buffer and other directionalizing fires that the neocons and the Saudis are content to allow to burn out as planned, leaving the region firmly under neocon control.

It's a gamble, to be sure, but the odds of its evil success are much better than even, even at the cost of an uber-destructive regional war between Iranian influence and Saudi Arabian influence. It's a war of gradualism and tentative allegiances in the meanwhile.

And if the U.S. finds itself someday seeming to side with Iran more than with Saudi Arabia, temporarily or not, then we shall all innately understand that we've always been at war alongside our ally East Persian Gulf Asia and against our enemy West Persian Gulf Asia. It all depends on the fires and the prevailing winds.