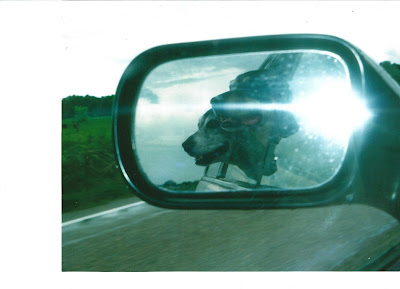 Dogs From The Future

From left to right, Daughter Mir and Mother Star, 10 and about 12 years old respectively and inspirations for many a password, in a photo I took in 2002 while taking photographs and driving with one hand or an occasional knee the back roads of forested central Louisiana at a roughly midpoint location between the Oakdale, Louisiana federal immigration detention prison holding I think mostly Mariel boatlift Cubans and the 3500-year-old 70-foot tall earthen mound built in the shape of a flying bird at Poverty Point world heritage site not far from Monroe built by a people unknown to archaelogists or any extant native histories or even tales. What will WE be remembered for? Our compulsive imprisonment habit? Maybe future people would be glad to forget that sorry episode of human development. They might be better off never learning about us, especially if sadism was unknown to them. Maybe it'd be better if we did something about it while we're here to do so.