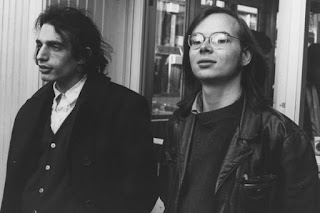 Half of Steely Dan died, Walter Becker, guitar-composer genius. Their albums are the only band's I can still get completely and ecstatically caught up in till oh wow would you look at that beautiful sunrise. I'll always be grateful for that too. No static at all, love. None. Hey Nineteen.

When I was "just a singer in a rock and roll band" in Memphis in 1975, our drummer had previously been a tour drummer for The Box Tops. That was actually one of our selling points, along with our original songs that had gotten the attention of a famous producer there. Our drummer was also my roommate for a while, and Tom eventually quit our band because most of its members preferred chasing groupies and shooting speed into their ankles to working hard enough to take advantage of our free studio recording time and unmatchable free expertise and guidance from a producer and engineer named Ron Capone who helped build Stax Records, Hot Buttered Soul Studio, and Ardent studios. He recorded and remixed Otis Redding, Sam and Dave, Booker T & the MGs, Rufus Thomas, Isaac Hayes (Ron did "Shaft!"), and many others. My band also backed some of Ron's other rising star prospects on demos in the studio, once with Steve Cropper, guitarist for Booker T & the MGs and for the Blues Brothers.

So in the first Comment below is a link highlighting the wide-open door opportunity my band had lucked into and eventually fucked-up our way out of. Part of me still is still pining away for what could have been. I also knew it would be my best chance ever to never work an honest job in my life and still make a good living, at least until the next best chance soon showed itself and I started writing copy on staff with ad agencies.

Anyhoo, drummer/roommate Tom joined a jazz rock band called Phase Two, which featured two incredibly talented women singers. They were the cream of Memphis bands at the time, playing the most sophisticated rock and popular music brilliantly. They played a lot of Dan Hicks & the Hot Licks and Steely Dan, just to name two. Their gigs lasted until well after most other bands' gigs were over, and many Memphis musicians would come to these late Phase Two shows to drink a spell and just really lay back and enjoy the reliably magical dynamic professionalism likely out of reach for most of us. For instance, I wasn't nearly as good a singer as either Phase Two singer. And Steely Dan was their specialty, and the two singers were very much up to that challenge as were their own supporting musicians. So, Steely Dan, Steely Dan, Steely Dan, the measure of popular music for many Memphis musicians and elsewhere during The Dan's early era. No frigging static at all. Just pick an album of theirs, any album. Then DO IT AGAIN.
at September 03, 2017