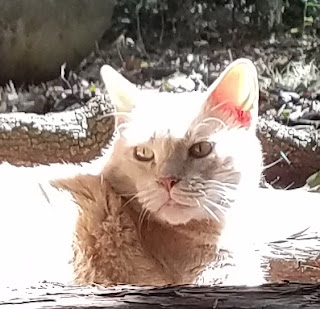 This morning during the 7 a.m. pre-dawn, a coyote suddenly began howling down the creek forty yards away.  The loud howls pierced the quiet stillness, and Tiger and I rose from the bed and ran to the front door.  He wanted to go outside with me and see, hear, and smell for himself, eager to further clarify the coyote's scent, the better to avoid one.

Tiger is a shrewd learner partly because he is a brave survivor of Austin's lean tough streets and partly because he craves information as do most cats.  When he had first come to live with us, he gradually became acclimated to the woods by means of a leash.  Soon after graduating to being unleashed, one day he actually charged a big deer which ran off at first but then stopped and turned its head around to see who exactly was chasing him.

Tiger kept approaching but quickly halted when he saw Doe had quit running and was turning to face him and now stared at him.  Then Doe, her head lowered, began slowly moving toward Tiger, and he reluctantly and only gradually began to retreat.  He doesn't charge deer these days but still will give them clear passage only reluctantly.  He definitely knows to act on new information learned.

This morning, despite Tiger having wanted to better learn Coyote's scent and because urban coyotes specialize in cornering even brave shrewd cats, I kept him indoors while I went out onto the deck and later back porch to loudly vent my displeasure at Coyote's proximity. I was grateful Coyote howled though.

I now know to delay my cats going outdoors today and for the next day or two, and got to show coyote how passionately I would defend my friends if the situation called for it.  I threw about a dozen big rocks in its direction, and in the quiet  they resoundingly thunked off of Oak trunks and crashed through the brush.  I thrashed about the underbrush gorilla-like, much in character and to my pleasure, and yelled like a growling baritone banshee.  I kept up all three activities for almost a minute and did a second and then third much briefer rendition of them.  I think Coyote got the clear message that there's a volatile unbalanced individual in the area.

I thoroughly enjoy the theatrics.  It's something I get to do from time to time.  I do an extremely milder version every day when I first let my cats outside for the half day they get to be out. There's no thrashing gorilla or rock-throwing daily, but the brief daily yelling and clapping is cathartic.  That there may not be a coyote within earshot doesn't deter me in the least, especially lately.

In the last month there's been a coyote outside my cabin at 8 a.m., one a couple weeks later at 5 p.m., and then another that night.  This one today at 7 a.m. was the fourth appearance.  That's more known appearances in such a short time span than I've noted in the twenty years I've lived here.

Extra due diligence is required now, and I'll have to limit cat outings and monitor them more closely while they're out.  I'm sure Grace and our neighbors already think I'm obsessed.  If that's true, that my over-the-top caution has become obsession and not just habit or practice, then I'm fine with it.  I can think of many trivial obsessions belonging to other people, and those 'habits' pass for normal these days.  At least mine is for a good reason.  I can live with that.  I just see it as raising the standard of care.

After all, I did chase off one coyote a few years ago that had already procured a neighbor's cat who did survive but whose head was already stuck in canine jaws by the time it first called out for help.  I only knew what to do and could jump into action so immediately because I'd practiced the scenario in my head dozens of times through the years, even learning how to triangulate the sounds of my own cats wandering around the woods and to eliminate any reluctance I might have naturally had to unleash my inner gorilla and stare down the coyote while screaming, waving my arms in the air, and running full speed in its direction.  Luckily it peeled away at the very last second and vanished, leaving neighbor cat only stunned and with cuts and a dislocated jaw.  Otherwise I would have had to kick Coyote and fight it until it ran away, and that's the one thing you can't really prepare yourself for.

Both of my cat homies came to me as outdoor cats and know the risks and also know how to protect themselves.  So I know they strongly prefer to take the risk to spend at least parts of days outdoors.  They'd like to be out in the evenings too, and even Neighbor Cat goes outdoors again almost as if nothing had ever happened to him.   Hopefully all of their experiences and awarenesses and my ability to keep them safer than if they had no one monitoring them, plus continued good luck, will suffice.  I pray so now, in my nonchalant assertive gorilla way.
at October 08, 2017