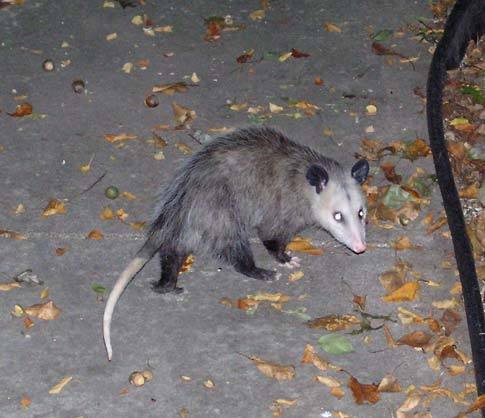 That playing possum thing is irresistible, brilliant, and courageous. If you've never had one lying prostrate at your feet, giving a phantom wink at your upright giant mammal strength and mighty brainpower, then you should frequent places it could happen.

It's a life lesson as interesting as anything you could learn in school or passive resistance training, though that playing possum thing is something you just can't teach, and it's hilarious, almost unbelievable, like a suspension of some important set of life rules for the time it's occurring.

My dogs believed it though. Years ago, my two dogs, Mir and Star, were outdoors walking toward my front door, and my wife and I were following closely behind. We got closer to the door and a possum came around the corner of the house toward the door, happening along just at the same time. The five of us arrived at the door practically simultaneously.

The possum sized up the situation instantly and collapsed “dead” on the stone walk. I mean, what else could it do? It's slow. Dogs aren't. It's a hard strategy to question, given that it's worked well for possums for tens of thousands of years.

Well, Mir and Star started sniffing and snuffling all around and over the possum, covering its full length and breadth, and seemed curiously befuddled, and then lost interest and wandered off. My wife and I went inside. A few minutes later the possum was gone. The Oscar goes to…

A few months ago at early dusk, I was in my house and looked out a window and saw my cat Tiger walking up to a “dead” possum.  He sniffed it and excitedly pawed it a bit, as this was quite a find compared to the occasional dead cricket or even doomed live lizard, yet the possum remained still and “dead”. Tiger pawed it some more and then nestled down a few yards away in the sphinx position facing the possum.  He had decided he was going to outwait it.

I wanted to see who would win this staring contest, as this possum kept its eyes open during its faux morte, perhaps aware of the known incivility and unpredictability of cats, but after maybe ten minutes it was getting dark and with coyotes roaming the area, I decided to bring Tiger inside for his own good. Cats may be smart in many ways, but they can be dumb or stubborn in others, and regarding coyotes they're probably some of each, thinking that “It” could never happen to them.

After we were indoors a couple of minutes, I looked out the window and, of course, Possum Lazarus was gone.  Tiger cooled down, ate, and had a nap.  Cats are mostly inscrutable, and I wonder how much of their personality they keep to themselves and if in a way it's a kind of playing possum.

One night my wife urgently called me to come home because there was a possum under the bed. I was at our cabin up the hill and had a few moments to concoct a plan. Possum had wandered in through an open sliding glass door. It had ambled down the deck through a phalanx of three cats who either didn't mind, and certainly didn't feel threatened, or perhaps were in cahoots with it for the added excitement.

When I got there, I first made sure the sliding door was still open, then strategically moved around chairs, boxes, dressers, anything I could find to build what became a walled pathway, with necessary corners and twists and turns, that led from bed to open door. Next I got on the far side of the bed with a broom and softly poked toward it with the straw end. It immediately dislodged itself from under the bed directly into the “easiest maze in the world”, careening ahead and side to side, gently bouncing off the “walls” like a furry four-legged pinball with poor eyesight and a pointy nose, and through the house it went, down the short hall, under the kitchen table bordered by chairs lying on their sides, and popped right out the door
.
Door closed, problem over, cats still nonchalant, and I still years later feel like a natural genius. You too can be a natural genius the next time you have a possum under your bed.  Just use my la-maze technique: First take a deep breath, then check your fear at the door, and lastly engage your sense of humor. Also, if you have a pet door, you might want to check it off your nightly list of locking things up before going to bed, so you don't have any uninvited guests underneath and wake up with a “dead” possum underfoot.

Last night I went to my backyard just after dark, bounding down the few steps onto the ground, and I stopped in my tracks as I noticed that a possum was stopped in its own tracks, standing up, only a couple of yards ahead and facing me. It had noticed me first, and now we were each on pause, eyes locked. Who would move first, if either, and which way? It sized me up quickly and speed-waddled off back into the good night from whence it had come.

With neither one of us expecting an encounter, the possum's instincts and reflexes were reliable, mine rusty and slow. If the possum had been almost six feet tall and myself less than one-foot high from the ground, I'd have been in huge trouble and this could have been the possum writing about last night instead of me.  I could have been in trouble anyway had it bitten me, say if I hadn't seen it and had kept approaching. Have you ever seen a possum bare its sharp set of teeth, or heard its ghastly hiss? I wonder what would have happened if I'd played possum. I wonder why it didn't.
.
We live up a small hill from a creek and in some woods, and we’ve had possums, raccoons, and our cats on our narrow deck all at the same time with never a problem. Sometimes young raccoons will jostle each other a little and no one else, some family dysfunction apparently, but harmony has prevailed and it's felt magical as if it were lions and lambs and everything nice, nature meeting nurture, a prophecy unfolding, and a future foretold.

You see, there was plenty of food to go around, and we were like a good, just, and noble 'one-percent' who made sure that everybody was well-fed, and we didn’t hoard all our food wealth in a too-big-to-fail food bank (our refrigerator), but instead understand the value of compassion and sharing on a communal woodsy society scale. It's all for one, one for all, each according to its need, and within everyone's ability, and not dependent on fangs and claws.

It was a bright and clear night, and there was no end in sight. No playing possum was needed and no one was needing to be defeated.