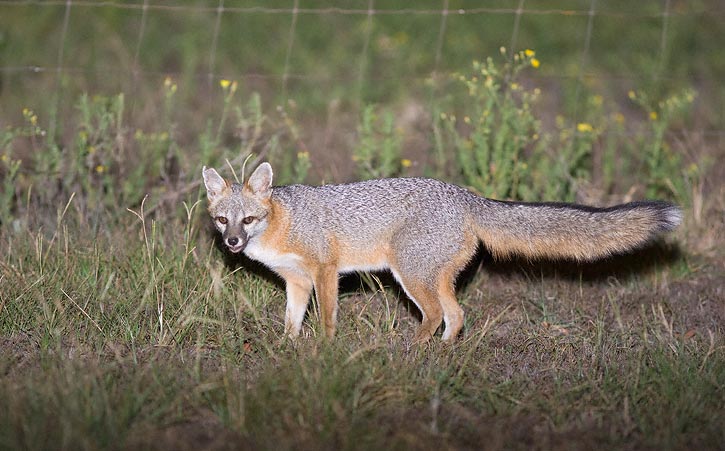 Evening's Fox in The Urban Primeval

Possums playing dead at my feet, ambling through the night like a slow ground meteor

A doe grazing along, leading the family to safety, bolting like lightning, looking you in the eye

A buck lowering its rack to fight, diving magnificently off a low cliff into the water and strolling supreme almost unchallengable through its hinterland

Spotted fawns hiding and quiet, hopping along innocently behind mom or auntie

A newborn black fawn from 20 feet away, and incrementally through youth into adulthood

Coyotes alone or in pairs, exuberantly zigzagging along a neighborhood street, crossing a creek, stalking the scent of prey with a periodic overnight signal howl to the dispersed pack

A dead nutria with four-inch yellow-orange incisors, dragged up with pride by my dog

A tiny tan fawn on its side hunched-over Don Quixote-like in silence, a coyote portion buried in memoriam under a protective and sacred rock cairn

A small doe washed up beside the creek after a thunderstorm deluge, a back leg broken, under its own rock cairn

A dead pregnant doe hit by a car, with the unborn dead fawn's leg sticking out the birth canal

A squirrel, once fed blueberries by hand, dead on the road, its partner standing grieving nearby

Rats in trees, a mouse ouside on a windowsill grooming, one living inside the back of the fridge

A six-foot rattlesnake pregnant with lunch stretched out asleep in the sun on our little pontoon dock at the lagoon (in April three years in a row), and you know it senses you watching

A baby gecko pressing flat against the stucco, assessing its world

Lizards in bushes, buckets, under chairs, everywhere, in silhouette on windowscreens hiding

Cardinals red and tawny, their varied repertoire songs a songfest, jays with their sqreeeeds

Birds with sweet songs to soothe the hottest day, busy titmouse all business and a'twitter

Screech owl flies in picks off daddy long-legs from the deck, dive-bombs your head

Until today though, just after sunset this evening, I'd never seen a fox in our woods.  I had seen them previously, about eight to ten times, sometimes around sunset, but only when one would cross the road in front of my car's headlights.

Curiously, each previous sighting happened on the same 100-yard stretch of sharp S-shaped curves while driving down a steep slope only three-quarters of a mile from the long driveway to our cabins.  So I'd thought it would only be a matter of time before I'd be able to stand in the same general patch of ground as a fox, but didn't think it would take 20 years to do so.

What impresses me most about foxes seen through the windshield is how low they crouch while dashing so quickly, a fast-moving low-profile gray blur in the gray twilight, out of sight between tree trunks that hug the road before it dawns on you what you've seen.  Fox seems to estimate an observer's expectation of its height and then manages to duck just below that threshold.  It's quite a trick.

Standing finally now on the same ground about 25 yards away, each aware of the other, I'm surprised how casually the fox esteems my presence at first, confident, even cocky, about its ability to elude me.

My cat had been sitting upright on the roof of my car, with me standing facing him, both of us enjoying what the evening respectively brings.  I love the cool air and the day relaxing into the more subtle and quiet night.  Tsavo too but may concentrate more on the evening's signs, opportunities, and secrets.

He'd been sniffing the air and soon craned his neck to get a better look at something behind me. He might have heard it even before he smelled it.  It was the fox, reddish-gray as best I could tell in the faded light, the most common color fox for my area.

It was a small adult, walking slowly, and its very bushy tail stretched out behind it parallel to the ground and seemed even longer than its lean furry body.  Its smallish triangular head turned our way briefly before its pace accelerated and it vanished in about two seconds stage left behind a tumble of two-ton boulders.

Tsavo craned his head further to see where it had gone, but there was only air where the fox had been, though cat eyes might have picked up swirling dust particles just beginning to settle toward earth.  That had been that.  The quick red fox.

An hour later, from the deck of the cabin, I see a waddling possum move stealthily across the extensive stone patio, disappearing into the dense rim of the woods in slow motion.  The slower it moves, the less likely it draws attention to itself, making lemonade out of genetic lemons, a very effective evolved trait.  Playing possum is a leap or two further from the stealthy waddle, demonstrating how evolution is on a continuum, with logical leaps.  Fox evolved differently, a waddle versus the fox blur.  A habeas corpus versus near-invisibility.

Another hour later and I'm outdoors hoping to spot Tsavo's eyes reflecting in my flashlight beam.  I want to bring him indoors, as I'd heard coyotes in the nearby wilderness area from early morning.  It's a couple of hundred acres of hilly forest with a creek, rills, and limesotne outposts where they den and from which they follow the creek upstream and access neighborhoods.  It's just across the road from us, and now that it was night it was more likely they might come hunt around the cabins.

There's Tsavo now.  Will he approach and greet me with a head butt as he loves to do and that I cherish, or will he try to preserve his outdoor privilege a while longer in hopes of finding a mouse while staying on the upside of the predator game?

Luckily for me, he approaches, tentatively at first, then more openly, and brushes his head on my pants leg.  I squat down, lower my head, and he gently bumps his head against mine a couple of times.  We exult, as usual, rolling on the ground, brushing heads.  It's everyone's birthright to belong somewhere.  I pet him for a moment or two, and then gently wrap my hands around him, scoop him into my arms and rise to my height.

Within only a few seconds, from across the road and from up and over a rise come the happy buoyant howls, yelps and cries of a coyote hunting party, probably after a deer, or maybe a lost dog.  There'd been a new poster on a telephone pole out closer to the highway, a pit-lab mix maybe, looking lost.  Poor thing.  It would never before have felt death's sanguine threat, unlike deer who live with it every night.  Deer live the culture of and practice the skills for escaping.  At first, a dog may think it's making friends.

Tsavo hears the coyotes too, no doubt more quickly and much clearer.  It's real to him, he knows the score, but only from one side of the equation, and despite his own skills and savvy, I know I've made the right choice, and we'll start the whole process again in the morning, and hope for the best as always.  For now he relaxes in my claiming embrace, with longing for whatever he will have missed yet brushing foreheads with me a few more times before we step onto the deck and enter the cabin.

We're all pioneers in our own neck of the woods, the urban primeval, in a boundaryless realm of clashing and compatible cravings and needs, in an age when the frontier, this time, has found us.

Oh, to be as quick as a fox, as engaging as a blur when needed, and as true to ourselves as a cat.

In a parallel world, winter is approaching, and galaxies of fabled rappelling caterpillars are fast asleep in their cocoons and chrysalises in trees, having inched countless miles upward, dreaming finally of wings, and gathering strength and an appetite for spring.

We sit in front of the screen, still for once, wondering what's next, the screen a two-way sieve. 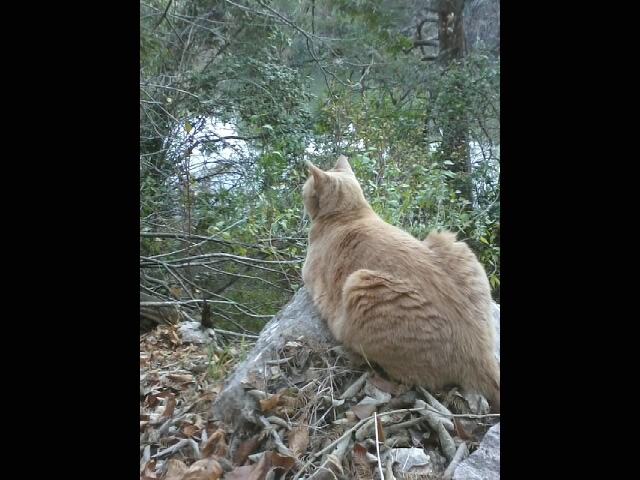 The fox photo is from stock and was taken near Bastrop, about 40 miles east of where I live.  The fox's fur that I saw tonight was a lot bushier, its winter coat.