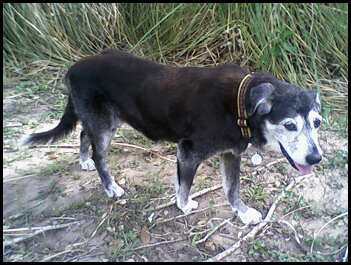 The Joyful Heart of a Dying Friend

"Yet she still goes through the doggie doors with her sideways, town-drunk gait in and out around and around the rooms of the house and all over the yard."  That is from my friend, Larry, of Gulfport, Mississippi, tonight, about his friend Missy, on the occasion of the passing of their mutual long-time companion, Super Scout, who like Missy is a border collie and 14 years old.

My old dear dog gal pal, Mir, at almost 17, had forgotten who I was due to a stroke and in her last few months had to confront and manage her apprehension and distrust of me.  This demanded considerable fortitude on her part, of which she had plenty.  I was now a stranger.  She had only her wits, legs, and teeth, plus considerable aches and pains despite medical and alternative therapies.

The vanished intimacy was a larger debilitation though and a great loss, for us both, as Mir and I had known each other since only an hour or two after the moment of her birth.  In fact, Star, her beloved mother, had passed away only four years earlier, and by then we had all been each other's closest companions for 13 years.

Luckily, Mir's even very diminished appetite would help melt away her distrust for a while each day, and I'd cook or buy something that smelled so good that her aversion to food would usually be overcome.  She'd lap up the Campbell's soup or chomp up the moist deli brisket or similar from a bowl I'd be holding at snout level.  I had to feed her in this manner because the stroke had wreaked havoc with her balance, strictly limiting her walking ability to tight left-turning circles, but also causing her to lean and swoon leftward even when standing still.

So when feeding her, I'd be squatting down in a kitchen corner by the stove and holding the bowl with my left hand while gently but firmly pressing her left shoulder against her determined leftward swoon with my right hand.  Thereby she was steadied and could concentrate on her food.  She did take notice of what I was doing and learned to allow and depend on the assistance, as she enthusiastically went about loving her new foods in a way that said, 'This is the best menu of my entire life!"

These were quietly joyful, poignant, and tender moments that happened two to three times each day, watching so closely her pretty elder face, with its white elder's eyelashes and fur, and gratefully enjoying her savoring of the meals, even when sparsely eaten, and they served to strengthen her and lengthen her life.  Her enthusiasm re-energized both of us, and her eagerness told me she was still plenty glad enough to be alive.

With intense concentration and practice, Mir did manage to learn to walk a straight line again.  We would take brief walks at first and I would hold a tight short leash, keep her to my right side, and, as she'd inevitably quickly arc leftward into my right leg over and over again, she'd have to learn to straighten her path to keep moving forward, until eventually, after a couple of weeks' training, she could walk a straight line on her own, only starting to circle again from time to time and would then be easily reminded to focus on walking straight ahead again.  She had learned to reestablish domain over her consciousness despite the neurologic injury she'd sustained.  This was Mir's beautiful mind at work, and I was elated to the core of my being that it had worked.

It was a true thrill for me to see her regain her pleasure of walking and probably the best thing I have ever accomplished in my life.  You could see her countenance change from one of harried confusion and extreme distress and duress - driven to exhaustion and despair by the dreadful relentless circling - to contentment and confidence.  She again began holding her head high and looked forward to every new step.

She could explore her woods again, her world that she'd known so well, and began to become reacquainted with it and with how it felt to be a part of it, more whole.  And though she'd always had the intelligence and relational comprehension to remain off-leash when walking with me, she adjusted easily and gladly to short happy walks with enough ease to reexperience her intimacy with her surroundings.

Eventually pain in her hips and really throughout her entire body began to flare and never receded, and in order to rest and sleep she would be forced to again begin stiffly circling and circling for many minutes, grimacing, forced into this tiring painful routine to try and negotiate a comfortable descent and position in which to lie.  When she finally succeeded in spiraling into a landing, with all of her limbs outstretched awkwardly like a fallen angel and her head in repose just however it landed, she seemed already asleep as she would flatten suddenly onto the floor.  The circling had returned with an evident neurologic relapse and worsening.

One cold night she walked out the front door onto the covered deck.  It seemed important to her, such that she had made a slow unaltering wavy beeline.  She then began circling for maybe five minutes, so tired, the neurological damage so demanding, and finally dropped into a fetal position immediately fast asleep.  I covered her with layers of blankets and winter coats to keep her warm while she napped an hour, before she awoke and I brought her back in for the night.

Her challenges had become too severe, too painful, and too exhausting for my debilitated darling, and my own degree of intense emotional discomfort as her friend told me I'd have to finally call the vet.  Mir's appetite by then had decreased to almost nothing.  Walking ahead had become impossible again, and no active recognition or relief could arise from within her circle of discomfort and inner focus.  There was no pleasure remaining for her.  No relief.  Only the love from her loved ones who by that time could only watch with an equivalent emotional agony.  The decision came on a Friday, and midday Monday the vet and an assistant came to our home.  When she left, part of me strongly wanted to go with her..

Instead, I swaddled her emaciated body in a blanket, let her rest on a bedroom table overnight, and then tucked her frail dear covered figure, whom I'd watched grow, play, age, and wither, into the ground next to Star, who today six and ten years later are represented by two large and wildly successful Mountain Laurel shrubs, currently conserving their energies for springtime's sweet grape fragrance and armfuls of blooming bright purple flowers.

Prior to the stroke, Mir had been getting lost in the woods close to home that she had long been immersed in.  I would keep an eye on her but lose sight from time to time.  She would be tottering around dreamily, seemingly content, sore hips and all, happy with her freedom, but I remember how relieved she obviously was once when I found her by the creek, where she appeared to be on an amiable walk but actually had become nervously wandering and wondering where she might be.

She'd been ambling ahead  in the sands and greenery of the flood plain bottomland as I approached her.  As soon as I'd appeared in her peripheral vision, she stopped and waited for me her head partly turned my way.  The long lingering hug and repeated eye contact were made more pleasurable and happy than ever by innate remembrance of our engaging times together and open acceptance of our present less familiar and daunting situation.  Our close moments were always worth letting the world spin on for a while without us.  The photo above was taken at this time.

I once found Mir standing up to her upper chest in a cold muddy backwater slough.  She was scared and was crying out, cold and stuck.  It was such relief to find her before her temperature had fallen too low for too long, though it was heartbreaking relative to her mental condition.  Her soaked cold body and lightweight witheredness, but heavy with the water, were living metaphor for her aging and illness.  At times, her illness seemed to carry more weight than did her remaining life force.  I carried her home, holding her tightly, never wanting to let her go, worried and crying for my dearest friend.

She was fully all heart by that time, her presence both reduced and elevated to simply love.  During her denouement, her random moments of  recognition of whom each of us had been to one another touched me deeply.  In those moments, she let me know that we're still here and that all was well again.  I can still see her smiling eyes from those times and in memory bask in her shared openness and happiness.  I could see these moments were also pleasurable for her.  They helped her relax into herself.  They helped balance the loss from her dementia and pain and punctuated her clouded days with bright penetrating rays of warmth and unspecified but vivid awareness of fuller days.

It sounds like my Gulfport friend's Missy is all heart too, with her ambling rambling ways.  Sometimes heart is all you've got, and, if so, it's all that you need.  I wished my friend Larry as much dear time with his Missy as they both are allowed.  And I thanked him for letting me know of his friend Super Scout's passing.  It felt good to be included, and reminded.

You can't replace 'em, Larry, our dear and intimate devoted friends, devout really, but you can still love 'em.  Forever and especially. 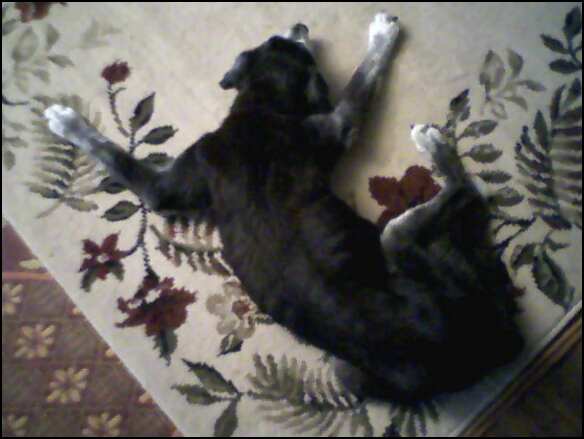