Who are the people who created these designs 3000 years ago in what is now Louisiana? No one really knows or ever will.  Given only what was available to them, could we hope to create a culture and civilization as organized and resourceful?
_____________________________

3,500 Years Ago in now N.E. Louisiana, thousands of unknown people were part of a culture that itself had already been developing in the region for at least 2000 years. Its major signifying site is a 72-foot-high earthen mound built in the shape of a bird in flight. The wingspan is 640 feet wide, and from the bird's head to its tail tip is 710 feet. Recently it's been shown to have been built in about three months, using enough dirt to fill 30,000 large dump truck loads, using nothing but woven bushel baskets.  Just as amazing, if not moreso, are the beautiful artifacts these people created.  Their trade reached the Great Lakes,Ohio Valley and the Gulf of Mexico.  If interested in who the first Americans were, this is the place to start.  It's much more mystery than answers, but it's challenging and fun to imagine who they were and what motivated them.
_________________________________________

Below is a schematic of Bird Mound with its six concentric semicircles of 10-foot high earthworks, with aisles dividing them into five parts and a ceremonial area in the middle along the banks of a bayou, which then was the edge of the Mississippi River's floodplain.  The rings open east to the sunrise. The bird of Bird Mound appears to fly westward.  The points where the semicircles meet the bayou are 3/4's of a mile apart. 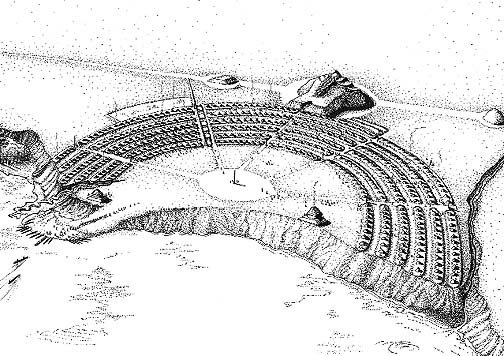 Below are carved plummets made from hematite, magnetite, and other groundstones from the Great Lakes area, the Ohio Valley, and the state of Mississippi's delta region.  The plummets have holes in their rounded points and are thought to have been used for fishing nets, though exact usage is speculative.

Below, these pot-bellied owls are the artifacts most closely identified with the mysterious unknown culture that flourished 3000 years ago northeast of what today is Delphi, Louisiana and on what became known as Poverty Point plantation, which was considered a hardscrabble estate at that site.  Cultivation has disturbed the site, about 500 acres, but archaeology has used sophisticated methods to uncover intriguing and puzzling evidence that will be interpreted and debated for many decades to come, if not centuries.

At some point, I'll post my thoughts about the origins of these people and the nature of their civilization, thoughts derived partly from readings begun at the Library of Congress in 1977 and 1978, including First Peoples mythologies and other traditional storytelling, and partly drawn from imaginative inferences of my own, plus my two visits to Poverty Point, the first in 1979 and the second in 2005.  It takes imagination to compile history, and I'll be using history, as recorded in myth, to imagine their world.