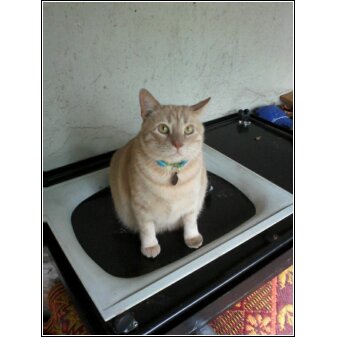 Tiger's a 21-pound cat on about a 17-pound max frame.  Rescued lean off the mean streets, he was a mean one himself, though looked like a raccoon had been meaner.  By mean, I mean fought for his food, and who wouldn't?  I get an edge at a buffet.  Now three years into his new home, I'm proud and lucky to call Tiger my little brother.

Just after dusk, Tiger's crouched on the edge of the deck as flat as a cat can make himself, intently focusing directly below, where an unsuspecting possum is snuffling around almost four feet down and near the recycling bin.  It's a regular visitor.  It seems to be the same one Tiger discovered playing possum in front of the house several months ago. They all don't look alike.  Tonight is different though.  Tiger's caught some luck, and now he's ready to spring.  Will the possum see him in time?

No.  Tiger's in the air, falling fast.  Look out below!  Thud!  Bulls-eye on top of the poor critter.  Now what?  That's what Tiger seems to wonder.  Since the possum didn't die of fright, possum popped back up and they're facing off three feet apart.  Hiss, goes possum, teeth sharp and menacing-looking, as they've been since soon after dinosaurs went extinct.  Cats are newcomers by comparison, but learning fast, able contenders.  They take turns taking short steps toward each other, like boxers, then back off again.  "Would you mind please running away" may be the message of the bluffing.

They each bravely hold their ground, cautious about fleeing or fighting. Then suddenly from four feet above drops a flying primate, landing feet first near and equidistant to each, scoops up Tiger and gingerly absconds with him around the corner of the deck and up the steps to safety, while the possum saunters off and Tiger wriggles in frustration.  Standing on the deck a while longer, the primate and cat still in tight liaison enjoy the cool evening air, allow the adrenaline a chance to dilute, and check that yes the possum made haste while the moon rose.

Remembering another evening, when Tiger jumped off the same end of the deck and chased maybe the same possum about 75 feet through the woods, over fallen trees and branches, and followed it off a three-foot ledge down onto the creek flood plain, the primate thought better of letting Tiger stay outside a while longer and the two went indoors.  Out alone again in the cold night, possum waddles in and out of mottled moon shadows, clearly understanding it can never be sure what may happen next, but at least knows what hit him tonight.  Perhaps they'll meet again, under similar circumstances.
at February 13, 2014