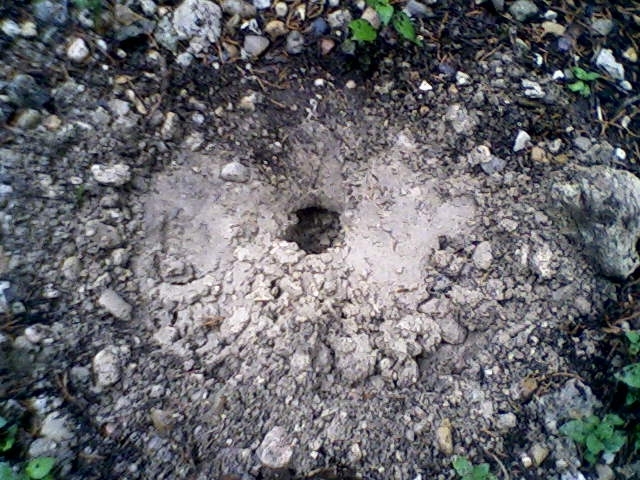 Soon the cove's turtles will be digging difficult holes in hard-packed dirt for their eggs, using only whatever nature's given them.  The holes are one to two inches in diameter and two to three inches deep.  They dig skillfully, then squat at a heads-up angle over the holes, and, when finished laying, release water which they mix with the dirt to bury the eggs.  They're masters at camouflage, because once finished you really can't tell where they've been digging.

Two or three months later, if a critter hadn't sniffed out the nest and raided the eggs, you usually find the hole opened up and soft broken-open eggshells close by around it.  Even without finding any trace of their path, you know that the most direct route to the creek or cove is the one these tiny turtles have taken.  You'll soon begin to see tiny turtle heads appear above the surface of the water and know the time of the turtle is upon you. A young one will very often swim in tandem with an adult, and you can find the young ones balancing on a stick or branch sticking out of the water so they can sun themselves or just dry out a bit.  They'll quickly drop into the water if someone gets too close or loud.

The nest hole pictured above is one abandoned before the eggs were laid, likely because some two- or four-legged had come too close.  I've been the cause of that several times.  One thing I found interesting is that if you come upon a turtle digging a nest or laying its eggs, it won't move even if you walk right by it.  When you come back later, the nest effort has usually been abandoned.  Also, as I myself have seen, turtles will walk 50 to 100 yards from the cove or creek to lay eggs, the better to evade the nest-raiding critters.  This just makes the baby turtles you see in the water that much more impressive, having instinctively found their way home.  Think of the faith that requires.

Once a turtle dug its nest within ten feet of the front of my cabin.  It was squatting over it when I walked by and went inside.  I watched it through a window for a few hours off and on, keeping my dogs indoors, and after noticing it was gone went outside and saw that the hole was as usual expertly covered over.  I assumed it had laid eggs.  I watched the spot for three months, maybe longer, and nothing had transpired.  I dug it up and the hole was empty; no eggs, shells, or trace of anything but dirt.  My theory is that once discovered, turtle decided to make it a decoy nest.  I'd be glad to learn one way or another what really might have happened otherwise.

The voice of the turtle may be silent, but I'm sure it's eloquent.