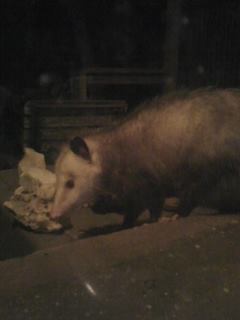 The Renaming of Daytime Possum

Daytime Possum showed up in daylight again, though it had lately made an evening foray onto the deck where it had previously clawed its way inside a white garbage bag where it was chewing its way through the contents when discovered.  Today it went straight for the source, showing up in the kitchen, and not at all playing possum.

The cats and I were on the deck.  Tsavo was taking a nap, Tiger was surveying his nature kingdom, and I went to the garden to read.  Fifteen or twenty minutes went by, and I went inside, where it was a bit dark with the lights off, and saw Tiger walking out from behind the kitchen counter.  He seemed especially content and cocky, and I thought he'd preemptively eaten Tsavo's dinner, as the bowl was empty.  Then I saw an unusual shadow on the floor in the corner by the stove.  I turned the light on, and it was Daytime Possum, cornered and not content at all.

I usually leave the front door open so the cats can come in and out, but today I'd opened the back door too, for the free flow of fresh cool air.  That door opens directly on the kitchen.  That door also is located in what Feng Shui books call the prosperity corner of my home, and that door is how Daytime Possum came to be in the kitchen.  Long story short, someone ate Tsavo's food, Tiger finally cornered his nemesis Daytime Possum somewhere and then walked away triumphantly, and amused-concerned me was left to fret upon the opportunity to enact another successful possum encounter outcome.

Upon a previous such opportunity, when a possum was under our bed one night, I'd re-opened the back sliding glass door, where the possum had entered, built a makeshift walled maze out of turned-sideways chairs, boxes, and other furniture that led from the bed to the open door, and then prodded the possum gently out from the bed with a broom.  Amazingly, it went all the way through the maze, bouncing off the walls like a pinball, and exited onto the deck.  The glass door was closed, possum stared at us through the glass with its big white possum face, and that, my friends, was that.

Today was a similar relief, but it involved me standing on the kitchen counter, a seven-foot sycamore branch walking stick, and a very stubborn possum that was every bit as reluctant to give up a good free food source as any one of us would be.  Even after I'd persevered in prodding it into the middle of the kitchen, with possum all the while hissing maniacally and opening its jaws to bare its sharp and gnashing teeth,  it still kept heading away from the back door toward the living room.  Finally it felt prodded enough to give up and exit the way it had come in.  For all the frightening rows of teeth and harrowing hiss, possums are pretty good-natured, ergo playing possum is still their best defense.  What better 'good sport' could nature provide?

Later that night, when I told my wife about the newest possum encounter, she laughed with special insight, because shortly after all the poking and prodding and its reluctant exit, she'd seen possum shambling by our other cabin a bit quicker than usual and apparently agitated, perhaps even disgruntled, as compared with its usual lackadaisical amiable amble.  Still though, it's likely Daytime Possum had been the beneficiary of Tsavo's tasty canned salmon, duck, and chicken.  Even if not, it did escape any real harm and escaped causing any as well.  For those reasons, Daytime Possum from henceforth will be known around these parts as Prosperity Possum, and there's a lot to go around, to be honest about it. 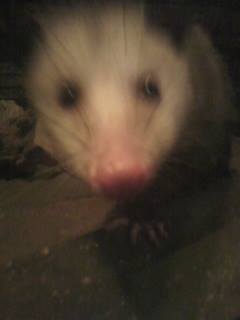